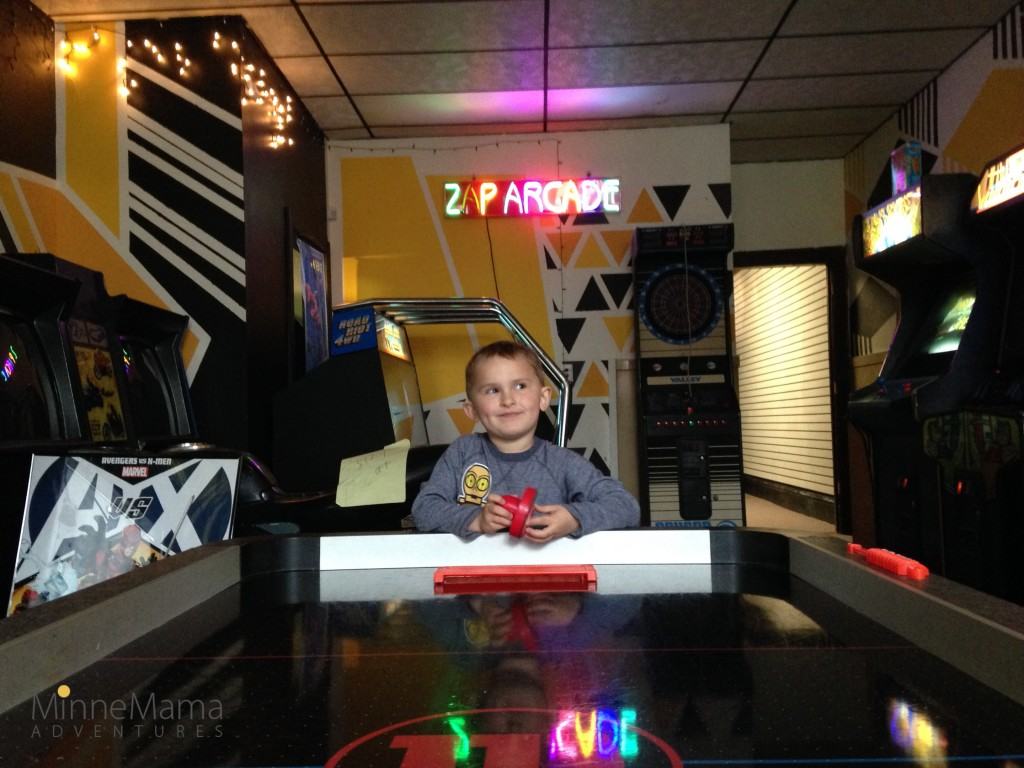 Zap Arcade. It was like walking into my brother’s bedroom, circa 1991. Cords strewn along the tattered carpet. Non-matching furniture. A few holes in the walls. And the smell of musty comic books and unkempt teenage boy. Woof! Our visit to Zap Arcade in Jordan, MN was an adventure for sure. My husband had been looking forward to this trip ever since I found the Zap website during one of my nightly Google searches. As an authentic 1980s arcade from your first step in the door, Zap does everything in its power to bring you back to the good ol’ days. $5 for a full day of all-you-can-play video gaming and a following of long-haired tweenage boys wearing skull caps and sweatpants while holding glass bottles of Coke like they’re from the set of Stand By Me? It doesn’t get any more vintage than this.

Zap Arcade and Comic Books is a retro comic shop and video arcade located on the main drag of downtown Jordan. Located in a sweet little brick building (I think it used to be a bank), Zap’s decor will make you feel like you have literally been transported back into the 80s, with Ninja Turtles posters on the wall (“Say No to Drugs. Say Yes to Pizza!”) and an actual Glo Worm sitting atop a Contra game machine. The main floor of arcade games was squeezed into a small room of maybe a dozen video games and an air hockey table. The basement (it looks exactly as I’m assuming you’re picturing it) had another dozen video games, plus a few beat-up chairs to lounge in while using the full history of gaming consoles, such as Game Cube, Super Nintendo, N64, and yes ladies…the original NES. You could play Rock Band, DDR, Sonic, Skee Ball, Ping Pong, Kangaroo, Donkey Kong, Fooseball, Super Mario, Brick, Space Invaders, TMNT or a simple game of Pool. How did I spend 30 minutes of my time? Playing Ms. Pac-Man, of course! Nothing better than making that crazy broad chase pretzels and outrun Winkin, Blinkin and Nod (or whatever those annoying ghost names are again). The other half of the building is a small store selling comic books and collectibles, candy, and a few colorful superhero shirts. This place won’t win any awards for cleanliness, but the workers were nice and it kept my son and husband busy for three – yes, THREE – hours on a rainy Sunday afternoon. 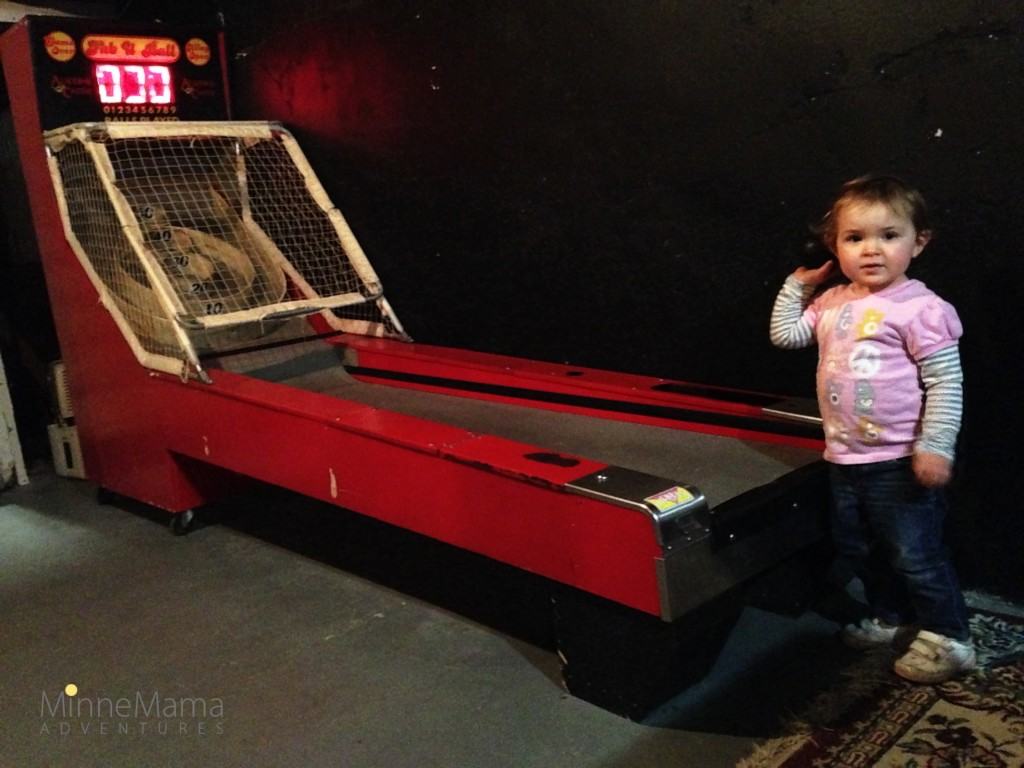 Fit for what ages?

Keep the toddlers at home for this one. My son will be five in June and he was right on the cusp of the minimum age for this place. The games are not all “G-rated” (Double Dragon, POW), so depending on your tolerance for video game violence, this field is pretty open for debate. But, keep in mind that 1980s “video game violence” is not exactly what it is in 2014. Also, as mentioned above, there are some local boys who spend all day here eating candy and testing out some of those lovely curse words little boys learn at school but can only use when their parents aren’t around.

The stairs leading to the basement are steep and scary. Of course, this is the only place my 2-year old wanted to play the whole time, so I was busy defending her from spills that could potentially break her head open. :/ Ahh! She also spent some time putting the pool balls into corner pockets and attempting to play Skee Ball. But, truth be told, I was pretty pleased when she fell asleep and we could just let our son do his thing without a whole lot of worry. Ages 5+ would probably be my ideal selection for Zap Arcade.

How much are we talkin?

Best part: $5/person for a full day of game play. Veterans and kids under 3 play free. All the games are set to play without quarters, which is awesome. Family-of-four day passes are available for $15. Monthly passes are also available if you’re really into this sort of thing and live close enough to Jordan. Bring loose change for snacks. The comic store does accept credit card. Yup, I got some serious birthday shopping done for my 35-year old brother here..and that is not an easy feat!

You can rent out the entire arcade for $75/hour too (birthday parties, bachelor parties, boredom?). Dunno. Could be kinda cool for the right kids (like these two below).

Call ahead if you’re going on a weekend, just to make sure it will be open to the public. We went on a Sunday and it was pretty slow, but I imagine Saturdays might get slightly busier. They host Free Comic Days as well.

Jordan is a sweet little town (and I do mean little), so set aside some time to run into one of the nine antique shops in a four-block radius (no, I’m not exaggerating). There are a couple food options nearby including Clancy’s Bar, Emma Krumbee’s, and a McDonald’s with a play area. In the Fall, there are some apple orchards along Hwy 169 that are worth a stop but the main event for me is Jim’s Apple Farm (ie. Minnesota’s Largest Candy Store!). A ginormous yellow barn filled top-to-bottom with old-school candies, licorice, and root beers makes this place a must-stop. Do note that this candy haven is only open from June-November, so don’t make any promises to your kids until June 12, 2014 when it opens this season. We learned this the hard way, and had to “call an audible” (as my husband says) by soothing their sweet tooth at the local Shell station. Bummer. Also worth mentioning: Jim’s is cash only. I’m quite certain I will be going back to the big barn, so watch for a post on that little piece of heaven this summer.

The arcade is open Wednesday-Friday from 3-8pm, Saturday 12-8pm, and Sunday 12-5pm. My iPhone did not pick up “Zap Arcade” when I plugged it in to Google maps, so be sure to grab the address. Just head south on Hwy 169, 10 minutes past Chaska and get off on Broadway. 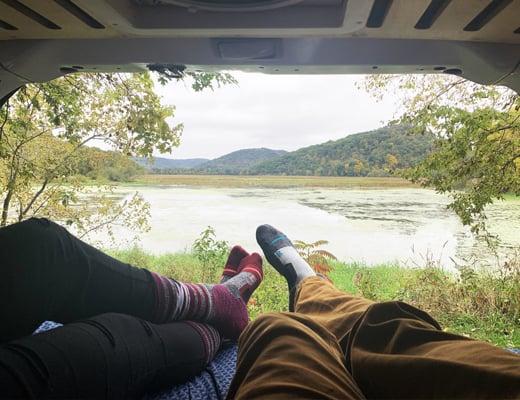 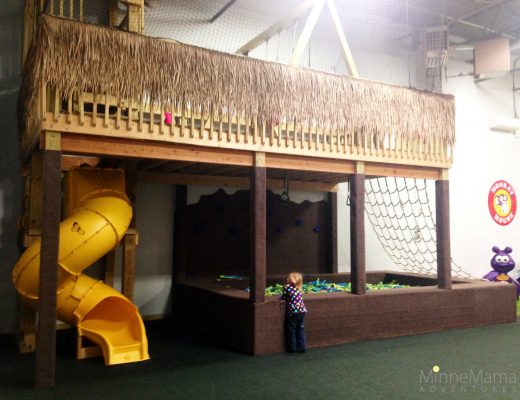 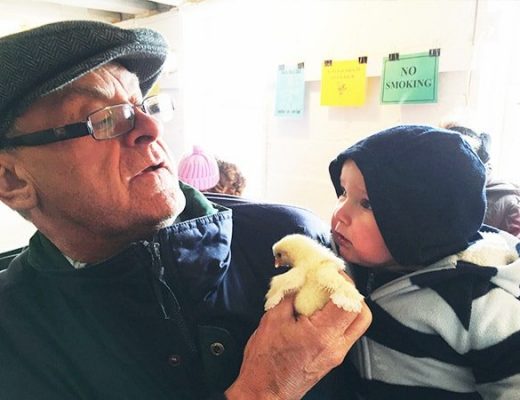 Welcome to MinneMama Adventures! I'm Nicki {insert handshake}, an avid adventurer and mother of three {insert exhausted head bob}. As an advocate for kindness, a preacher of positivity and a firm believer that family comes first, I want you to feel confident that adventuring with kids shouldn't slow you down. Rather, it should bring you up. Now let's go on an adventure!

I have a preteen. But I also have a big set of mam

Our little family (and friend family) managed to c

Have you heard of the Van Gogh immersive exhibit a

New blog post on the site – 12 Fall Family Fun a